In 1918, Kiyotsugu Hirayama published a manuscript in the Astronomical Journal titled “Groups of asteroids probably of common origin”, opening the field study of asteroid families. The IAU 2018 General Assembly represents the 100th anniversary of this seminal work. In the intervening 100 years, Hirayama’s initial insight that these groups of objects were not random has been supported by countless studies spanning orbital elements, colors, spectral taxonomy, albedo, rotation, impact physics, and dynamical evolution. This wealth of information has become a key aspect in family identification and interpretation, expanding our understanding of family-forming processes.

Asteroid families have provided unique insights into the forces shaping both our Solar System and other planetary systems. Families provide us observable evidence of large-scale catastrophic impacts in the Solar System, giving us the tools to test impact physics on planetary scales. Families also have been critical in revealing the fingerprints left on the Solar System by gravitational mean motion and secular resonances as well as the Yarkovsky effect, the most important non-gravitational force for sculpting the Main Belt of asteroids and supplying new objects into near-Earth space. The quantification and simulation of the Yarkovsky force has enabled age dating of asteroid families, providing us a chronology of the impacts in the inner Solar System. Families allow us to probe the heterogeneity of the protoplanetary disk in the terrestrial planet region, and homogeneity of the parent bodies prior to the family-forming collision. And recently, collisional families have been identified beyond the Main Belt in populations as diverse as the Jovian irregular satellites and the Trans-Neptunian Objects.

Asteroid families are currently undergoing a revolution in understanding due to the combination of a rapid increase in asteroid survey data, and improved computational resources and techniques allowing for detailed simulation of family formation and evolution. Some of the avenues we wish to explore with this Focus Meeting include:

We plan to explore these topics with an open, community discussion during the final forward-looking session of the Focus Meeting. This will allow experts from around the world to share ideas, establish connections, and coordinate research projects in these emerging topics of study.

In this Focus Meeting we propose to review the history of asteroid family science; highlight some of the major results as well as watershed moments in the field; discuss new work being done; and provide predictions for the future of the field in light of the new techniques and data sets that are currently being developed. An asteroid family Focus Meeting would provide the international community a chance to celebrate the centennial of the birth of this field, reflect on the broader insights provided by asteroid families, and chart a new, unified path forward in the era of large surveys that are ongoing or will be beginning in the near future. Asteroid families will continue to be a touchstone for Solar System science in the next century, providing insights and test populations for planetary formation models not available in any other way. 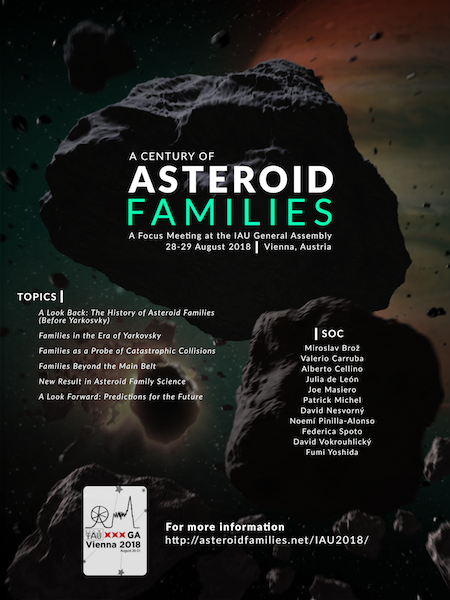